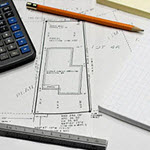 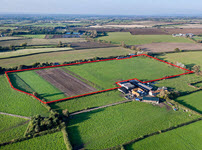 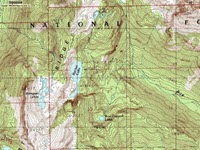 Land Surveying is the overall term to describe the process of measuring points on the ground and getting the relationship of that point to any other point. The general types of land surveying, related to real estate or property, are:

1. Lot Surveys – An individual lot that has been “platted” and recorded at the same time as other lots to form a subdivision. This is usually taken from a larger tract of land and is done with the construction of streets and utilities. These are also normally residential in nature, but may have other purposes. These lots are usually smaller, normally under an acre.

“Lot 2, Block A, Easy Living Estates, as recorded in Plat Book 3, Page 197 in the Probate Office of Henry County, Alabama.”

A lot survey is completed usually when the land owner has a question about where the line is located in relation to a neighbor. Also, when you finance or re-finance a home, the bank will usually want an updated survey to make sure there are no issues that need to be addressed at that time.

2. Boundary Survey or Property Survey – Surveyors use this term to indicate a survey of a parcel of land somewhat larger than a small lot survey, and the land is described according to a “metes and bounds” legal description, instead of a Lot & Subdivision description.

3. Topographic Survey or Topo Survey – This survey goes a step further than the boundary or lot survey and shows the elevations of particular items. The topography of the points are often shown using contour lines. Each contour line connects points with the same elevation. Sometimes spot elevations are also shown for particularly important points like a sanitary manhole, a water meter box, or the corner of a curb line.

Lot and Boundary Surveys are often used when you’re going to a bank to borrow money. You might also need a survey if you’re preparing to put up a fence around your property.

The lot and boundary surveys both will show what corners are found and give distances and bearings between each point on the property. If a fence is being erected, there may also be additional points along lines that you cannot see between.

Showing encroachments that are found may be the most important step completed by the Land Surveyor. When someone else has built over the property line, the owner of the property (and the bank) need to be aware of that fact. In most cases it can be worked out through the legal closing process, but in some cases, it might require much more work by the attorneys. The land surveyor is the expert at finding encroachments.

Showing easements that are recorded on the plat and making sure there are no encroachments over those is also an important step. Easements are held by other entities (cities, counties, etc) in order to place or maintain some type of improvement across multiple lots. A sanitary sewer easement may contain a sanitary sewer line that serves this lot and others as well.

Uses of the Topographic Survey

A topographic map is used by Engineers or Architects to prepare grading plans so that we know how an addition or improvement on a lot will look. The engineer also looks at connections to utility lines like sanitary sewer, water, power, gas and electricity. If sanitary sewer is close, then the sewage effluent from the house will either be carried by gravity or a pump to the sewer main in the street.

Lot surveys usually take the least time so they are less expensive, typically. In some cases there may be problems that come up that take a little more time to complete, but in most cases, the surveyor can knock out a lot survey in two to four hours time. The drawing may take an hour or two.

Most surveyors charge a minimum price of around $450-600 for the lot survey, but some may charge more, based on the time it takes to complete the work.

Boundary surveys will usually take considerably more time, depending on the size of the parcel. For example, a 40 acre tract is approximately 1320 linear feet on each side. That totals a mile when you survey all four sides, which we typically have to do. Surveying a mile of land can take anywhere from one day to three or four days.

Also on a boundary survey, you will probably have to look into the neighboring property owners deeds to make sure there are no overlaps of the legal descriptions given for each parcel. Since the adjacent parcels were deeded at different times, this is often a time consuming effort by the surveyor. Typically the person who’s deed was completed first has “senior rights.” The next person has “junior rights.” This is much different than a subdivision plat for lot surveys, which are all assumed to have the same rights as all the other lots in the same subdivision.

A land surveyor will attempt to estimate their field time based on assumptions about what they might find in the property corner areas. If all of the pins can be found, and the measurements check out compared to the deeds, then the survey will take less time than estimated. But, this rarely happens. Surveyors have to look up as much evidence of the location of each point as is necessary to be able to place a corner back where one has been destroyed or pulled up. Some corners were never actually set in the first place.

Topographic surveys typically include the lot or boundary survey so this would be added to the cost of either of those. Getting enough points to produce a 1-foot contour map means you need to get a point shot about every 25-30 feet. We also shoot any “breaklines” that are running across the property.

A breakline is where the ground makes a sudden change in direction instead of a gradual change. A ditch will often be shot as a breakline and the banks on each side will be also. Again, depending on the accuracy needed, this could take significant time in completing.

If we can help you with a Lot Survey, Boundary Survey, or Topographic Survey in Alabaster, AL in the future, please don’t hesitate to contact us at Alabaster Land Surveying at (205) 624-0032 or fill out our contact form to the right.